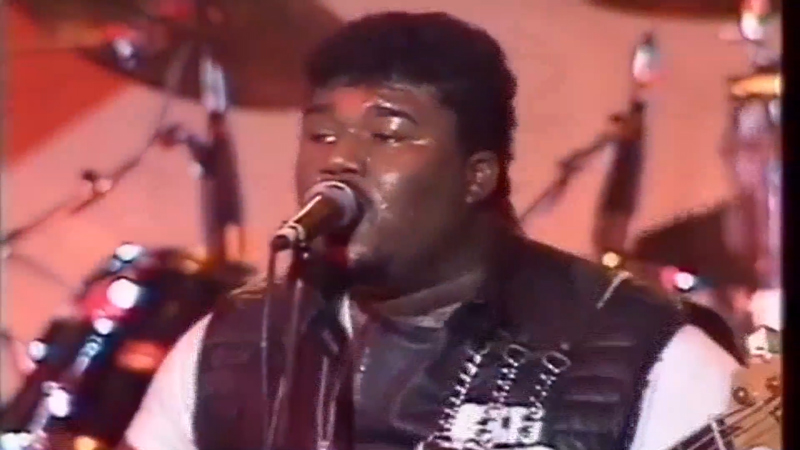 A DC native, Tony Wilson Fisher began playing music professionally as a teenager. As a result, the bands he played with had to sneak him into the clubs that served alcohol… he was just that good!

Trouble Funk, a musical group born on the streets of Washington, D.C. , is synonymous with the emergence of the non-stop, percussion driven, best seen live, experience the party, audience participatory call and response, grassroots, homegrown music called Go-Go. As the world wide ambassadors of this musical genre, Go-Go, a distant, but older cousin of Hip-Hop, Trouble Funk has taken their sound from the gritty streets of D.C. to the clubs of the nation and the festivals around the world for the past 30 plus years.

Trouble Funk, a musical group born on the streets of Washington, D.C. , is synonymous with the emergence of the non-stop, percussion driven, best seen live, experience the party, audience participatory call and response, grassroots, homegrown music called Go-Go. As the world wide ambassadors of this musical genre, Go-Go, a distant, but older cousin of Hip-Hop, Trouble Funk has taken their sound from the gritty streets of D.C. to the clubs of the nation and the festivals around the world for the past 30 plus years.

The band and their sound, developed by mixing an uproarious blend of swinging, up-tempo 70’s funk with a 60’s style horn section, heavily laden with infectious percussion, topped off with booming vocals and the genre’s trademark call and response, burst onto the music scene in 1978. Trouble Funk, in its infancy, consisted of the writing team of band leader, bassist and vocalist Tony “Big Tony” Fisher, keyboardists Robert “Syke Dyke” Reed and James Avery and trumpet player Taylor Reed. The group was rounded out with the musical prowess of drummer Emmett Nixon, percussionists Mack Carey and Timothy “Teebone” David, guitarist Chester Davis, trombonist Gerald Reed and saxophonist David Rudd while they peppered the musical landscape of the 1980’s with anthems “Drop the Bomb”, “Pump Me Up”, “Let’s Get Small”, “So Early in the Morning”, “Saturday Night Live From Washington, D.C., Parts 1 & 2”, “Say What?” and two R&B/ Hip-Hop Billboard charting tracks, “Still Smokin’” and “Good to Go”. 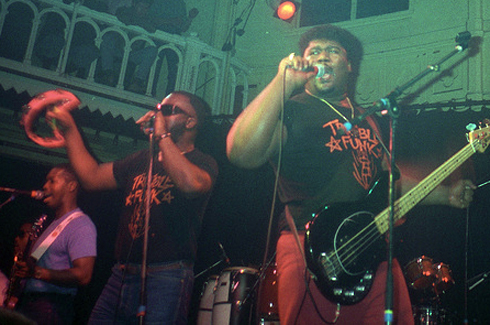 “Drop the Bomb” was the first Go-Go record to be released outside of Washington, D.C. and was released on the pioneering label, Sugar Hill Records. Trouble Funk, with their raw, party driven style, was able to capture the attention of musical enthusiasts of a variety of genres catapulting themselves onto the national and international music scene. They would frequently tour with notable punk rock acts Minor Threat and the Big Boys, while still gracing the stage on major music festivals with legendary artists such as Curtis Mayfield, Parliament Funkadelic, Red Hot Chili Peppers, UB40, Def Leppard and Fishbone, to name a few. Trouble Funk also recorded with Kurtis Blow and appeared in his video, “I’m Chillin’”. 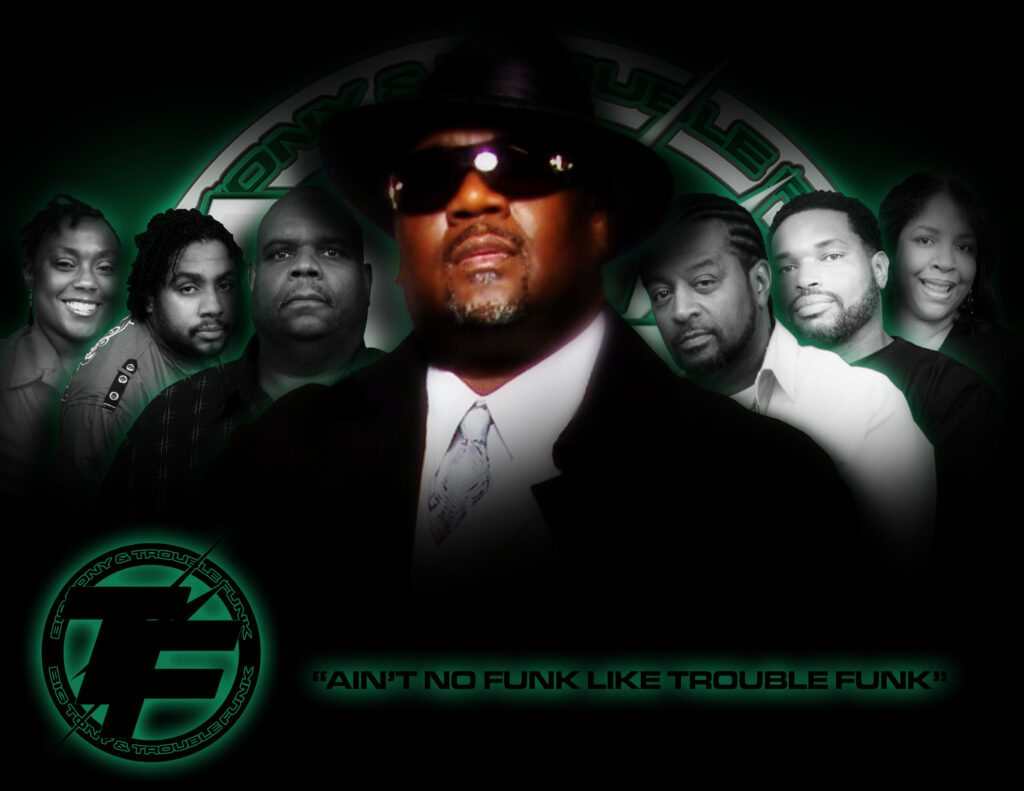 From 1986 to 1988, Trouble Funk toured extensively throughout the United States playing legendary venues such as Madison Square Garden and the Apollo Theatre and on worldwide stages with multiple stops in Brussels, Paris, Amsterdam, London, Spain, Nice, Denmark, Germany and Japan. A stop in Switzerland included a performance at the highly regarded Montreux Jazz Festival. 1994 brought Trouble Funk back to Japan for an extended tour.

In the mid 80’s, while Trouble Funk was signed to Island Records, their live performances were captured on the big screen in the film “Good to Go” starring Art Garfunkel. The film, produced by Island Pictures, showcased Go-Go music and most prominently, the music of Trouble Funk with the group featured on 5 of the 13 tracks on the soundtrack. During Trouble Funk’s obligation with Island Records, they worked with the legendary Bootsy Collins who produced the album “Trouble Over Here, Trouble Over There”.

Today, Trouble Funk still tours frequently, playing a variety of festivals while their music has been kept relevant through sampling. “Pump Me Up” is one of the most sampled tracks of all time being sampled in over 70 different songs by various artists including Will Smith, Kurtis Blow, Grandmaster Melle Mel and the Furious Five, M/A/R/R/S, Guy, Public Enemy, 2 Live Crew, George Clinton, Vanilla Ice, EPMD, Run-DMC, George Michael. “Pump Me Up” is also featured in Style Wars and the fictional R&B radio station WildStyle in the game Grand Theft Auto: Vice City. Trouble Funk songs “Drop the Bomb” and “Say What?” recently were noted in a lawsuit over sampling issues filed by the owners of the Trouble Funk catalog, Tuff City, against the Beastie Boys for usage in the Beastie Boys songs “Shadrock”, “Car Thief”, “The New Style” and “Hold It Now, Hit It”. “Let’s Get Small” has also been sampled most notably by Ice Cube featuring Michael Jackson and Shaquille O’Neal on “We Be Ballin’ (Street Mix)”.

Recently, U.K. artist Kindness covered Trouble Funk’s “Still Smokin’” on his hit “It’s Alright”. Kindness wanted to capture the live performance of the Go-Go energy and sound and flew across the great pond to film the video live with Trouble Funk at Washington, D.C.’s U Street Music Hall. 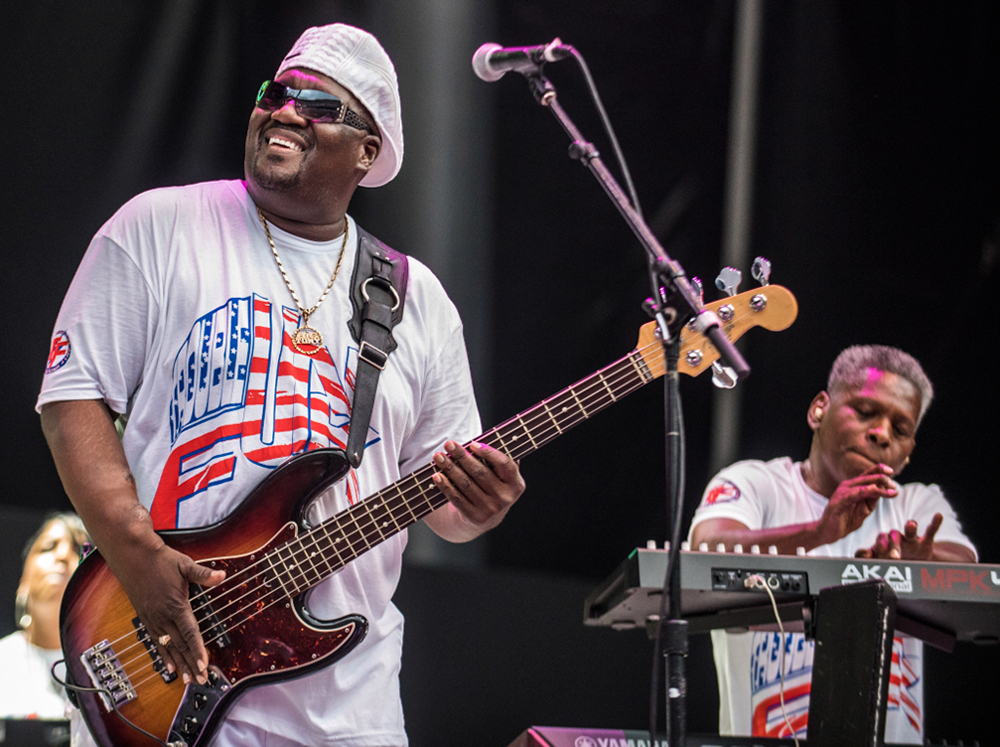 Big Tony and Trouble Funk was featured in the HBO series “Foo Fighters, Sonic Highways” where Dave Grohl reveals that Trouble Funk was a big influence on his musical career. In fact, so much so that Dave asked Trouble to appear on stage with Foo Fighters and other notables for the 4th of July Celebration Concert in Washington, DC’s RFK Stadium.